Our Fab Family Siblu Holiday in the Vendee 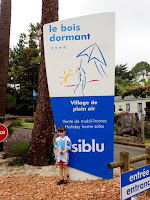 We were lucky enough to be offered a holiday at Siblu.   We are Chris, myself, Jasper 8 and Scarlett 4!  We have neighbours from the Vendee, and having heard many tales, we were very keen to sample it for ourselves!   They worked the Vendee Globe one year, sounded great fun!

Finally the day was here!  Siblu operate on a Saturday to Saturday basis, so we travelled by Brittany Ferries from Portsmouth to Caen on the 21st July, and arrived late afternoon.

We finally arrived at Le Bois Dormant Parc around 8.30pm.  (For a review of the ferry trip click here) 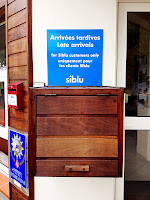 I was concerned that Reception was closed, but they cleverly have a late arrivals box, which contained our keys, a map to the site, our code for entry through the secure barriers, also some general information as to what is on offer.

We were very impressed with the mobile home we were given, but to be honest we were so hungry, we wanted to check out the bar and grab some hot food - we had some food with us, but the allure of take away for the first night was too appealing!   Pizza and Croque Monsieur later and we were all in better humour!

I did try to purchase wifi from the bar area, but it didn't work out.  However the next morning, the ever so helpful Amy on Reception sorted it out immediately!

On the Sunday we headed to the local Supermarket.  There are two very close, the Super U and the Intermarche, we chose the Super U!   It was very, very busy (we managed to lose J, but that's for another day), mainly as all the new arrivals arrive on Saturday, and also the Supermarket closes early on a Sunday - as a tip I would say its worth bringing enough food to last you until Monday, or rely on the well stocked shop on the site, and you can do a major shop on Monday at your leisure!   We used the local shop daily for fresh baguettes, pain aux choc and croissants - normally fetched by the children armed with the right money and a whole heap of trust <-------says the ex helicopter parent ;)

After the shop we could contain the kids no longer, so headed for the pool!   I was so impressed with what was on offer! A large pool at the far side, another pool but with a cordoned off shallow pool in the middle, then a kiddies pool with little slides and stuff at the end.   In front of that were some wavy and twisty slides that opened at set times, and looked like great fun - both kids went up and down all afternoon!
After dragging the children back to the home, we cooked a lovely BBQ - well Chris did of course, and feasted well outside, at the large table under the awning!   We were struck by how light it was until very late, which helped us all to slow down and chill out, unlike at home where night comes and we panic the kids aren't asleep ;).   After a full day here we were very happy and confident this was going to be a fun week :) 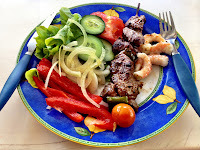 On the Monday morning we were due to meet Catherine Renaud from Siblu and Fabienne Couton-Laine from Vendee Tourisme.   We met at Le Bois Masson, which is the sister site to Le Bois Dormant.  You are allowed use of the facilities at both parcs!  Apart from Puy Du Fou, we had no plans for the week, so it was very helpful to be given some ideas of what was around the local area.

It is clear that for a family there is enough to occupy 2 weeks let alone 1, so we had to be choosy!  Having said that, there is enough as a couple too, but we had our mummy and daddy heads on!

The following summarises what we did each day, but if you want more information about any of the places we went, then click on the links which will take you to a more detailed post about each place! 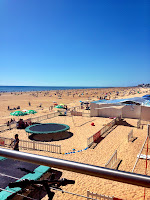 After hearing about the cycle paths around, we went straight from the meeting to hire some bikes from  Le Bois Masson, and off we cycled, through beautiful pine forest, to the gorgeous, fine, sandy beach of St Jean De Monts.

We had a lovely day out and headed wearily back to the parc.   The kids had got a feel of the freedom of the parc, and obviously felt safe and secure, as they wanted to head off on their own to meet some friends they had already made.  I'll be honest, it killed me to start with, but Chris tried to reassure me it would be fine, and I managed to only check up on them about four times!  Another BBQ and we were done in - that heat and sea air will do it every time! 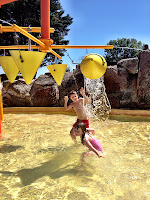 On Tuesday morning we headed to La Perle des Dieux to hear about the history of sardine fishing in the Vendee, and then given the opportunity to purchase some, which we did.  Some of the tins, once eaten, will also be adorning my kitchen walls, as they are designed by local artist Delphine Cossais and are fantastic!

For the rest of the day we headed to the Atlantic Toboggan Water Park - over six hours playing in the park, in the full on sunshine, absolute bliss!  I even got to chill out whilst Jasper pedalled me around on the swan pedallo's, bless!

After having another BBQ at the home, we headed to the bar area, where we relaxed and had a drink, whilst the kids had fun with their friends, we also made some friends and had a really good evening, suffice to say these people became friends for the week and addresses and emails exchanged :) 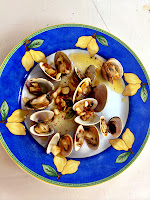 Wednesday morning, we headed to Noirmoutier Island, we could have headed to Oceanile water park, but although it looked fun, we thought we'd take it a bit easy.  (There is a market in town Wednesday and Saturdays, but I was overruled).

We headed there via the bridge, but on the way back went via the Passage Du Gois, the causeway, only accessible at certain times of the day!  What we discovered was the locals digging the seabed for clams (a quick google later), so we duly joined in!   What absolute fun, we took our foraged clams home and cooked them on the BBQ!   The locals call it the "Ballet of the Bottoms Up" - just fantastic :)  There's a video on the link if you want to see more?

Earlier in the week we had booked tickets for Puy Du Fou via the reception.  It was the one big day out we'd  planned from the UK.  It is kind of a theme park but has more to see and no rides, its difficult to explain, but worth looking into!  You can book online for discount, but Siblu reception could offer us the same discount.   So on Thursday we headed there for the day.  We arrived at 10am for the opening and literally spent over 8 hours there.  The shows they put on are spectacular, and even though in French the children were still captivated.   In between the shows there are lots of other things to see and do, so if you are in the Vendee it is an absolute must!

On Thursday evening we dined at Le Bois Masson, which was lovely, a bit of karaoke with our new found friends, well Chris did (but then he can sing), and then home for a good nights sleep!

So Friday loomed, our last day, but I cannot tell you how excited we were!  We were going to spend the morning at the pool, and then go back for some clam foraging!   However, it started to drizzle, so after a short swim we decided to head out to Port Du Bec for lunch, and what a good decision that was!   The port itself is known as the Chinese Port, as the little boats are moored to rickety old wooden pontoons, but we found the best little restaurant there, and ate the most devine seafood! 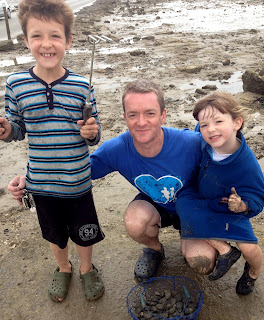 Then, drumroll please, off to forage for more clams, armed with the right kit, Team Robb were on the case!  Even in the drizzle I cannot tell you how much fun this was, Jasper kind of just made patterns in the seabed whilst Chris, Scarlett and I foraged, and what a bounty we got too!  I think the picture above says it all! 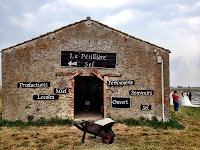 On the way back we stopped to buy some salt, which is also a feature of the region, and I love that there was a bride and groom having their pictures taken next to it, you may just make it out to the right, was trying to be discreet, bit different to our chimney sweep pics! (Not me but a British thing)!

Another delicious clam meal later - just add butter, white wine and garlic sauce, and we were off out to the bar to say goodbye to our friends.  It coincided with the opening of the 2012 Olympic games, which was a lot of fun, and was very relaxed knowing the kids were with their friends having fun and creating their own memories.   What a fantastic end to a fantastic holiday........Saturday morning we headed back to the boat for home..........

To summarise, we had a fabulous week and only wish we were there for longer.  There was so much more we could have done, Zoo des Sables, Planet Sauvage and the Aquarium to name but a few. ....  You can never be struck for ideas around the Vendee either, as at most of the places we went they had display cases with little cards describing the many things to do and see around the region.

Siblu itself was fabulous.  This is not the sort of holiday we would normally go to, but as a kid we used to go to holiday camps in England, and I can certainly see the appeal.  Even though we didn't make use of the children's clubs, the fact that the kids could take themselves off to the well equipped park, was more than enough for us.    The park itself had a football pitch, cycle path, swings, two playgrounds, and areas to play boules etc, as well as the 3 pools and slides, it was plenty big enough, but also secure enough, for me not to worry! 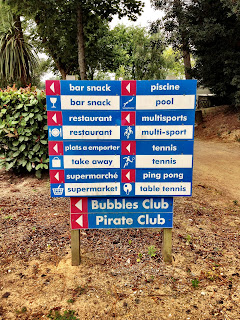 The mobile home was well equipped and plenty big enough for the four of us.  The children's bedroom had a mosquito blind as well as a blackout blind, genius given how light it stays into the evening.  The odd evening we knew we had an early start, it worked a treat to get them to sleep - not that that was difficult after the full days in the hot sun that we had.  The homes were also set amongst pine trees which acted as further shade, and it was lovely to sit at the table in the evening, BBQing or just relaxing. 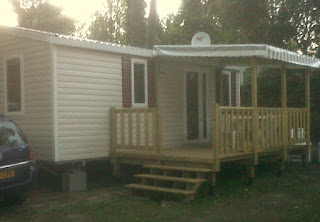 We loved it, and now that I no longer fear the ferry ride, this will certainly be on our radar to go back to!

Disclosure: the holiday was courtesy of Siblu holidays and Brittany Ferries
Posted by JustAnnieQPR at 21:13