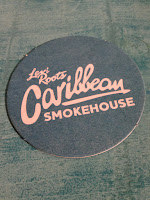 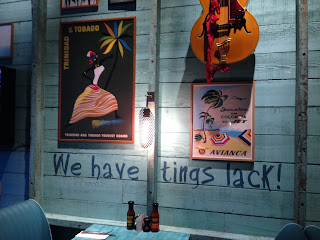 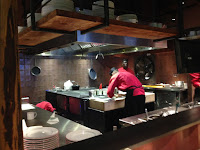 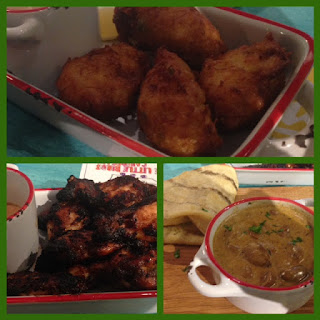 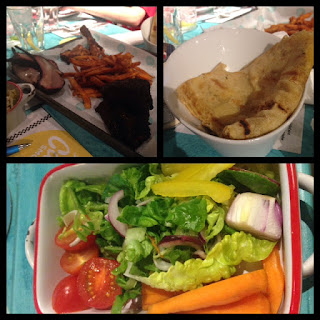 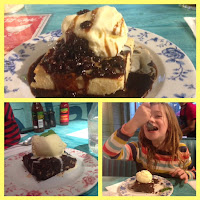 I adapted another recipe to make it suitable for the slow cooker.  This is also fab using mutton, but if you can get goat it is so worth it.  I've found a supplier locally who does it (Madina General Store, Hatfield Road, St Albans) - what a find!  I only went in for some scotch bonnets and curry leaves!  (Wasn't able to source scotch bonnets or fresh curry leaves from either Morrisons or Sainsburys locally)?? 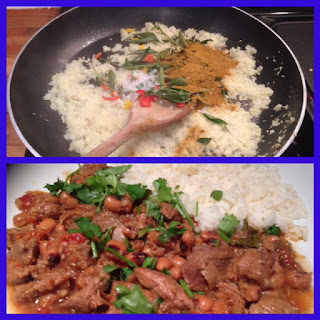 Ingredients
1 large onion, chopped
10 garlic cloves, chopped
100g ginger, peeled and chopped
a little vegetable oil (I was the spray version)
2 scotch bonnet chillies chopped (I used a red and a yellow)
Small handful of curry leaves - more Asian than Caribbean but it works
3 sprigs of thyme
4 tbsp mild curry powder
750g mutton or goat (I used shoulder)
400g can chopped tomatoes
150ml lamb stock
400g can of beans of your choice, drained,I used pinto
juice of half a lemon
Small bunch of coriander, chopped, plus a little more to garnish

Blend the onion, garlic and ginger in a food processor to form a paste.

Heat the oil in a frying pan and add the onion paste, frying for a couple of minutes.

Add the chillies, curry leaves, curry powder and meat and stir until browned.

Pour mixture into the slow cooker, add the tomatoes, stock and beans and stir.

Cook for 6-8 hours until the meat is moist and tender.

Add the lemon juice and coriander and serve with roti breads (if you can source them), or rice or salad of your choice.

Simply delicious, and Chris said it was my best curry ever!  Fine accolade indeed.

I have a pre-teen, my goodness he's only 11, but my I've noticed a difference already.  The silence, or - if I'm lucky - the occasional murmur in the morning, show the signs that this boy is not ready for school first thing in the morning.  Having said that he does get himself up and dressed and fed (often force fed) in time, but it's not the tigger bounce in the morning of yesteryear!

So was very interested to watch on BBC the story of the school who have shifted the school time for teenagers to 1.30-7pm, and apparently making a whole lot of difference.   The hormone changes in the hypothalamus means that them getting up at 8am (say) is the equivalent of an adult getting up at 4.30am every morning.

It's too early to check exam results, but by all accounts making for happier kids all around! I love this kind of stuff, and will be monitoring.

Having said that, Jasper is doing very well, as he's a conscientious kid (for the teachers), but still one to keep an eye on.

You can watch for yourself here!

Would welcome feedback from real parents with real teenagers, I am just a fledgling right now ;)