I was chuffed to be invited to a Mums On Three event recently, hosted by Three.co.uk  I had no idea what to expect so was glad to bump into some familiar faces, though unfortunately also spilt hot tea on some unfamilar ones oops! 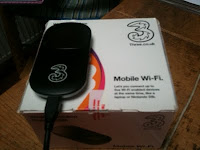 Unfortunately some of us were unable to pick up Wi-Fi, so was kindly lent a mobile WiFi (Mi-Fi) unit, which I'd never heard of but blew me away.   This little gadget lets you connect up to five wi-fi enabled devises at the same time, and could well do away with my Wi-Fi unit at home.  No idea on costings as yet but will certainly be looking into!

We were then introduced to the panel of mums who were going to give us an informal chat about how smart phones have made them make better use of their time on the go.  Amongst them were the lovely Denise Van Outen and Lowri Turner.  Lowri gave a lady some useful advice about expressing milk, she advised that you note the time the milk is taken, as nighttime milk has special hormones in it to help the baby sleep!  I never knew that.

We then attended various informal seminars allowing us to discuss useful apps for mums on the go, and also shown the different smartphones available.  I am never far from my iphone but there were mums there who didn't have smart phones who found it useful.  They discussed the fact that a lot of mums don't get onto the computer until late at night, but with a smartphone they could be getting on with jobs during the day, from ordering the shopping, to checking activities for the kids to shopping for themselves even, things that aways take up time that they often don't have available!  The lady from Three who spoke to us had a beautiful dress on, and she told me she ordered it whilst sitting in the car on the school run :)

They have now got a handy facebook page with tips and competitions etc. which I will certainly be keeping in touch with.   Two apps I learnt about that are amazing are Jamies Recipes (free on iphone), which has a shopping list feature, and Ocado (also free) where you can take pictures of what you need to replace and they drop into your shopping basket!  Wow doesn't cover it.


I don't have enough apps on my phone to do the 32gb justice, so am off to have a play!


Thanks for reading.
Annie x
Posted by JustAnnieQPR at 15:58