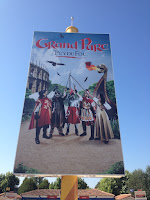 When we heard we were lucky enough to be going to Siblu in the Vendee, Puy Du Fou was one of the places we planned to visit, having read about it back in the UK.

It is a huge theme park, but rather than rides there are spectacular shows and authentic villages to see and experience.  If you click on the link above it has a fabulous video summing it up!  We were able to book it via Siblu reception, who offered the same discount we would have got booking via the Internet. The great thing is that the tickets are then valid for some months (ours said Apr to Sept), so you are not tied to a date, just in case the weather or plans changed.

We went on Thursday.  It opens at 10am and we were advised to get there for 9.30. We left at 8am, but we had to grab breakfast en route so in fact we arrived just before 10. There are lots of shows throughout the park - but there are five main shows, and you get a schedule on the day. 4 of the shows are on 3 times, but Le Signe du Triumphe - the Roman spectacular - is only on twice. This show is held in a full size coliseum by the way, the pics cannot do it justice!!!  We were advised to head for no. 5 first - Richelieu's Muskateers just right of the entrance, and finish with no. 4 - which is back at the entrance. This worked well as we worked out the other shows within these 2 and managed to see all 5!

The other shows are!
The Vikings
The Ball of the Phantom Birds and
The Secret of the Lance

There are more shows than these 5, so these are suggested as a minimum!


The doors normally open 30 minutes before each show, but don't worry about kids getting fidgety, they very cleverly have little warm up acts to keep them entertained, and I have to say they were pretty hammy but very funny, including taking people out of the audience to embarrass :)

The shows themselves were incredible, amazing, jaw-droppingly fab. The costumes, scenery and special effects were superb, and the acting by the actors and all the animals left you smiling and often wondering "how did they do that"? The fact that they were all in French didn't detract from their entertainment either - you could hire headphones to translate - but we didn't feel it necessary.

Between shows we explored the other various villages and the obligatory playground, and Jasper and Scarlett particularly liked the animals! We took a packed lunch - but to be honest the prices inside weren't too bad! I'll add a few pics but don't want to spoil anyone's future enjoyment! It was extremely hot and at one point the kids started flagging, but a good old fashioned water fight put paid to that! There are different vapour showers dotted around the park too - which was a great idea!

I cannot recommend this show highly enough, they are planning a Christmas spectacular too, which is certainly on my radar at the  moment!

One final cheesy family picture to top it off, Scarlett took this whilst we were waiting for the Roman spectacular, and yes I am restraining Jasper as it suggests haha! 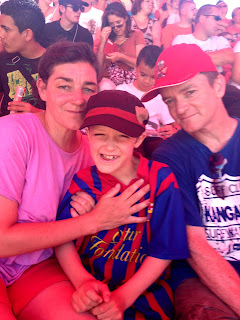