I am finally part of a book club, hoorah!  The lovely @mummybarrow over on twitter invited me to join and I jumped at the chance.   I used to be an avid reader, so it was great to have the incentive to get back into it. If you want to get involved then get involved here :) 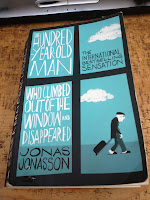 The first book chosen was The Hundred Year Old Man Who Climbed Out of the Window and Disappeared - an intriguing title in itself.  In fact the author says he thought of the title before he thought of the plot, because he very much wanted to read a book with such a name.

Before reading it I did wonder what could possibly be so interesting about an old man climbing out of the window, but the story of what happened in the next few days was quite simply both hilarious and unbelievably believable!


These chapters are then interspersed with the story of the man's life leading up to that point.  I found myself hurrying between the current days happenings to the past history, as was the want for further knowledge of both!

My history is a little shaky, so I was a little lost on some of the salient points, but it didn't detract from the book as a whole!

To try and sum up, this is a man who enjoys a vodka, and although not interested in politics or religion found himself travelling round the world drinking (or not drinking vodka) with most of the key political leaders through the ages - again an unbelievably believable story!  A man who does not like to second guess anything, but certainly has nine lives when it comes to survival!

Of course I won't reveal the ending, but if you were on the Ryanair flight back from Crete last Friday, I was the one laughing loudly in row 20 - sorry!

Despite the one typo I found, on page 364 *fickle* I have recommended Chris read it next so will let you know his take on it too!

Thank you T, can't wait for the next offering :)