Brittany Ferry - Scarlett asked if it was a tooth ferry haha

We were lucky enough to be invited to the Vendee in France, staying at Siblu Le Bois Dormant, sailing Saturday morning with Brittany Ferries - Scarlett (4) asked if it was a tooth ferry haha!

It was an early start to get to the 8.30 sailing, but the kids like being woken "in the middle of the night" and when you have a week's holiday ahead of you it really is not a hard(ship) *groans*! 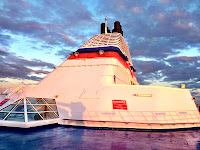 Anyone who knows me knows that I am not dead keen on boats of any sort, so I was a little bit anxious, but armed with my Rescue Remedy I put on a brave face (that's a lie I actually cried when Jasper asked what we do if it sank), but it was early!!!


We were given a cabin, which was fantastic, and I think at around £30 would definitely do again!   I thought I'd be nervous being away from the deck, where I can watch out for icebergs, but in fact I began to feel quite calm about the whole situation, and actually, I have to say, enjoyed the experience!   When I attempted sleep - like that was going to happen with 2 excited children - I put a can of drink on the ledge so that if we did tilt it would hit me on the head and wake me up - yes I know how silly that sounds but hey!

I have to say that 6 hours went by very quickly and we were happy to be in France at last!

The return journey was a breeze, wasn't scared at all, relaxed and enjoyed it - though very sad to be leaving for home.

I think I may have to be thanking Brittany Ferries for calming my fear of large ferries at the very least!

Since I have made this blog more about me (surprise), a fab blog about the ferry crossing can be found here - by a fellow blogger I met on the return journey!

Disclosure, the holiday and crossing were courtesy of Siblu and Brittany Ferries
Posted by JustAnnieQPR at 18:31