Thanks so much to @sandyhoops for mailing over her excellent match report from last nights game! I've added some pics from QPR.   Feel free to comment or join in the discussion!  Thanks Sandy! 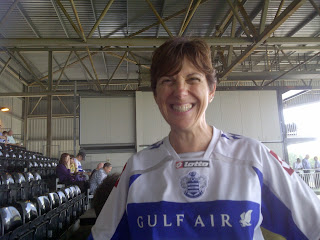 "I don’t know about you, but I found last night’s game against Swansea rather satisfying!  In fact, when you consider our home form this season which, I think it would be fair to say, has been really disappointing, our last three home games have been rather satisfying!

But what made last night a little bit more special for me was that it was against one of our fellow-promoted teams – a team doing better than ourselves and which had, until recently, taken the Premiership by surprise.  Didn’t one football pundit claim that Swansea are a “breath of fresh air” to the Premiership with their flowing style of football?

Last season, Adel Taarabt made Swansea look decidedly ordinary as he almost single-handedly destroyed them, scoring two himself (one of which was contender for goal of the season – or did it win, I can’t remember now!) and having a hand in the other two.  Last night, he pretty much did the same thing – without actually scoring!  The number of times he left the Swansea defence flat-footed as he danced his mercurial, Moroccan dance around them, left me in no doubt that the Championship Player of the Year was back to his delightful best.  Mark Hughes has had a superb influence on the young genius who, by his standards, had not had a good first part of the season before leaving for the AfCon.

Taarabt left a QPR in January that does not resemble the QPR he has come back to – and he is one player who has benefitted enormously from the change-over.  Buzsaky is another.  In January, with Warnock at the helm, Buzsaky’s future seemed destined to be anywhere other than at Loftus Road – he was told as much.  But now, although he is not a regular starter, he is an integral part of Hughes’ new-look Rangers and his goal last night, only his second of this campaign, was a scorcher – definitely the best of the three (apologies to the cracking efforts by Joey and Mackie!)
Buzsaky is a very intelligent player although, at times last night, it looked more like laziness to my dear friend sitting right next to me.  It is funny how even sitting in two different seats – let alone two different parts of the ground – can make a game look so different!!  I knew we would have plenty of periods when we wouldn’t have the ball against this “breath of fresh air” yet I thought our midfield was excellent last night.  We controlled proceedings for large parts of the game but, more importantly, when we didn’t have the ball we chased and harried Swansea restricting them to short passes around the centre of the pitch and in their own half; and preventing them from moving forward usefully towards goal.  And, when we did have the ball, didn’t we spray it around effectively and decisively?

A few weeks ago, I criticised Barton’s passing – last night I was purring with delight at the accuracy of his passes.  Barely one was not a completed pass – and when he did lose the ball, he chased back like a ferocious terrier – and didn’t commit a single foul in recovering the ball!  Wow!  He is doing the simple things very, very well – at last!  Short, clever passes; one-touch passes; long balls that a few weeks ago would have flown out of play are now landing with pin-point accuracy at the feet of the intended team-mate.

And what about Diakite?  Who had ever heard of him?  And, let’s be honest, after his red card in his debut match, who ever thought we would hear of him again?!  But he is showing his class now.  He breaks up play so effectively but also has vision and accuracy and, as we know from his goal against Arsenal, a pretty powerful shot!  I am so impressed with him.  Boy oh boy!  Are we spoilt for choice in midfield – and this is all without the irrepressible, sadly-missed Ale Faurlin!  (I bet you thought I was going to say Shaun Derry – I think he was pretty worried about his place in the midfield after last night’s performance – but don’t worry, Shaun, you’ll be back for us soon!)

I know Zamora had a chance or two: what a shame he missed a sitter in the first half when he received the ball a mere three or four yards out and managed to sky it into the School End upper tier!  But technically, he is amazing.  He holds the ball well, pulls defenders all over the place, crosses the ball dangerously and, if Probert had actually taken action every time Zamora was held back or held down (not just the once that gave us a free kick which led to Barton’s screaming opening goal on 46 minutes), I would say he is pretty decent at heading the ball!

Have I mentioned that Kenny, who had little to do last night, seems back to his last-season, brilliant best?  I have been impressed with him more and more recently – his return to form seems to have coincided with the improved performance of our much-maligned defence.  And, to me, it is no small coincidence that this has happened since Clint Hill has taken centre stage, literally, in a growing partnership with Anton Ferdinand and we have had a settled back four.  I always felt Ferdinand wasn’t quite ready to lead the centre of defence and, indeed, Hill seems to have taken it upon himself to organise our defence and lead the line – and doesn’t he do it well?  Another superb, and necessary, goal-line clearance came from our man-mountain (Hill doesn’t seem to describe him adequately!) which could have made the score 2-1 and would have put a whole different complexion on the match.  The defence worked tirelessly and deserved our first clean sheet since October 2011 (interestingly against Chelsea!)

We kept our shape last night – as we did, albeit with 10 men, on Sunday at Old Trafford – we stuck to our plan.  And we made that “breath of fresh air” look stale and tired and very, very boring.  Swansea’s plan seemed to be to knock the ball about in defence, back to the goalie, through defence to midfield and back again to the defence and then the goalie!  I nearly fell asleep in the first half!  There was only one team playing “total football” last night – and they were playing in blue-and-white hoops (are Swansea trying to compete with us in the revolting orange/mango away shirts competition – is there a competition?!!)

I do believe we have enough to keep ourselves up and the turn-around in our home form is instrumental in this process.  Fulham fans were quick to let us know that we would be happy with Hughes as our manager but that he takes time to get his message across and working – about 10 games they reckoned.  Well, I believe he has been our manager for 15 games now – so that would be about right!  After our farcical performance up at Bolton a few weeks ago, we seem to have grown in stature and unity.  We are playing some lovely, flowing, one-touch football at times, as we did so well last night; but we are also defending better, passing better, finishing better and playing with more confidence and fight than we have at any other time this season.

I hope we can pick up points away from home in one or more of our last 3 away games – at Chelsea would be particularly sweet; but this weekend at Brom will be fine for me!  And we must continue to be “fortress Loftus Road” against Spurs and Stoke.  And if we do all that – no mean feat, let’s be realistic – we will deserve to retain our place in the Premier League.  And next season, with the likes of Diakite and Faurlin in midfield – Premier League watch out!"