On Saturday we decided to go to Paradise Wildlife Park in Broxbourne, Herts.   Some time ago I had bought a half price ticket at £25 from Likebees.com and being a Sunny Saturday in the school hols seemed the perfect time to use it! 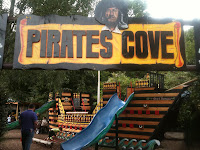 We got there around 11.30am and were amazed at how quiet it was!   As you enter you immediately come to the playground, and whilst Chris and I were eager to see the animals, we forced ourselves to let the children lead us on their day out!  I must admit it is a pretty cool playground, and they've obviously been sprucing it up as it looked much more inviting than our last visit! 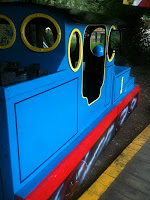 They also had a lifesize fire engine and an old steam train for the kids to play in - Jasper and Scarlett were in their element!  The inside of the train particularly was just as it would have been, and Jasper could only be withdrawn from it with the offer to go on the real train!
It is a Thomas the Tank Engine replica, it's only £1 per person, and only does a little circuit.  However, if you have youngsters, there are wild animal models en route, which produce the relative scary noises!  The driver offered to turn them off for us, but not sure he could do if it was very busy?
Eventually we got to go see the animals, and again was impressed with all the improvements since our last visit! 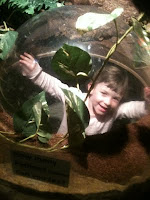 We particularly enjoyed the funny free-range chickens running about, and also the bloke who paniced thinking they'd somehow got loose, at least it wasn't a lion!
They were from the Farmyard area, there's also a Reptile place and a Rainforest Area.  The animals all seemed well kept and happy - not the greatest fan of zoos to be honest!
They also have a tractor ride around the Park, which is free, and worth doing if the little ones legs get tired!
There are some rides that they offer free at certain times, but charge at others, and a few other rides that they charge a minimal rate for!  We didn't go on any of these cos I figure once you've paid your entrance fee then that should be that! 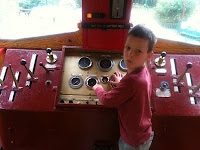 After an animal too far the kids wanted back to the playground again!   So we grabbed some lunch and watched them play (they'd already have hotdogs)!
In all we were there about 3 hours.  If I'd paid full price I think I'd be a but upset, but the price I paid it was just about right.   Will definitely go again, if I can find on another deal!
Also, most importantly, everyone was worn out at the end!
Enjoy!
Annie x 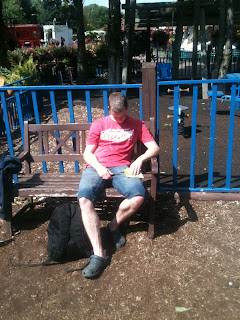