Well it's MeatFreeMonday and I thought I'd have a play!  This was supposed to be a Balti but decided it should be Jalfrezi instead (minus Fenugreek, not my fave spice)!   I added the home-made paste to some chopped tomatoes as I feared it would be quite dry, and it turned out to be a good idea! 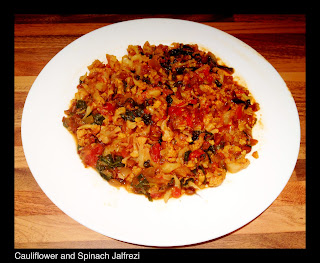 For the Jalfrezi Paste
Put these ingredients directly into a whizzer/blender!
2 cloves of garlic, chopped
2cm piece of ginger (or helper)
1 tsp turmeric
2 tbsp groundnut oil
2 tbsp tomato puree
1 fresh green chilli chopped
Small bunch of fresh coriander
Toast the following in a pan until popping, then pound with a pestle and mortar and add to the whizzer/blender contents!
2 tsp cumin seed
1 tsp brown mustard seed
1 tsp coriander seeds
Erm - whiz to a paste!  Some of the green chilli stayed still intact but I quite like that!

This now makes ups your basic Jalfrezi paste, which can be frozen for future use!

Serve with nann bread or rice, or whatever you like :)