The Cresta Run at The Snow Centre, not just for kids!!!!

We were invited to check out the Cresta Run at Hemel Snow Centre on Wednesday.  It was for mummybloggers and our little ones, though trust me its not just for kids!  We were all very excited!

Although most of the kit was to be provided (only boots for the 3yo weren't available), we got kitted out best we could anyway!  I stole my husbands Helly Hansen jacket, which I realised made me look more professional than my ability would prove, but willing to try and blag it!  Not seen the video yet but if my screaming is included will have to admit that said blagging was a failure ;)


And I now have the video, and it is as suspected haha :)

﻿
﻿
I'd never been to The Snow Centre before and was amazed at the facility that has been under my nose, but out of my radar!  The Cafe Bar was fab too, and intend to go back for lunch sometime!  We were greeted by a welcome sign, and introduced to all the staff. 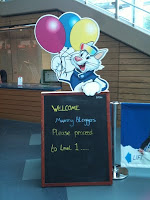 When I looked out at the Cresta run it suddenly dawned on me what I was about to do.  I was going to put myself into a giant rubber ring and be pushed down a snowy slippery slope.  Not only that, I was going to subject my children to the same!!!!

At first my children weren't too willing, so I had to mask my fear and prove what fun it was, and do you know what, it really was!!!!   I was kind of loving that the kids didn't want to come with me cos I was having so much fun going up and down, allbeit screaming like erm, well a girl, but trust me it was screams of delight!

I don't have many more pics as I was concerned for my iphone, so gave it to Sonny, one of the Slope Patrol, on top of the slope to look after.  The other slope patrollers were Lucy and Vicky.  It was a very professional operation as they ensured only one person on the slope at a time, despite my son just diving in as and when he wanted to from half way!   My daughter just stood and watched for a bit, but about half way in, I noticed that the girls were actually guiding Scarlett to smaller little zippers, and letting her have a go further down the bottom of the slope.  Scarlett got particularly attached to Vicky, and by the end of it was in the proper rubber ring and being guided down from the top.   The patience shown to my children was just so wonderful, which meant it was a really special and thrilling afternoon out for all!

Lastly, we were allowed to check out the Air Boards, following a safety chat!  I wouldn't have done it if @mediocre_mum hadn't done it first, but again it was thrilling to the end - even though I did chicken out and more or less attempt to brake from the top - which didn't help at all and I fell off, allbeit near the bottom.  My son was helpful though, asked if I'd done a poo, thanks for that Jasper!

I needn't have worried about being cold by the way, it was very warm under all the layers, and what with going up and down the slope, hair was soaking with sweat afterwards, nice :)

When we got home, the kids could not stop talking about it, and are desperate to go back and try the skiing!  When my husband got home, he was pinned in the hall for 20 minutes whilst they told him all about their afternoon, their little faces beaming!

Check out their website, its a fabulous way to spend an afternoon, and tire out the children too, win win in my book :)

It was brilliant, thanks so much to Fabiola, Ali, Chris, Elise and everyone else involved, trust me, we'll be back!

Annie x
Posted by JustAnnieQPR at 10:17