The boys were at Arsenal so I decided to take my 6yo Scarlett with me to her first game since a baby. 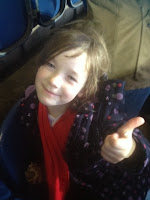 It's not really her thing, she can do the chants with the best of them, but she was very excited to see where mummy goes.

I took her to the Bok pub beforehand, a classy little joint close to the ground *coughs* and we bonded over a lemonade and a Diet Pepsi (am sure I ordered DC but hey)!

The game started brightly, as it always does, and then quickly descended into the disjointed affair we have been subjected to of late.   Charlie was on his own up front, and I don't have to tell you how we just cannot play this way.  I understand we have fitness issues with Andy J and Bobby Z, but I would rather put them on first and go for it, rather than hope we can hang on for 45 and then go for it 2nd half.  But hey, I'm not in charge.

As it was, Doncaster could have gone 3 -0 up in the first half.  Around the 40 minute mark we were talking amongst ourselves about how we always do this, and yes the inevitable did happen, on 43 Minutes Theo Robinson scored to put the away side 1-0 up grrrrrrrrr.  To be honest tho, it wasn't a shock, as I say we could see it coming, unfortunately :( 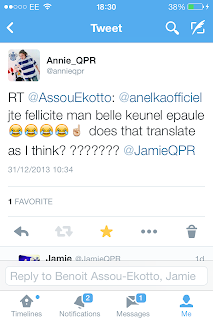 As an aside, I was getting very frustrated with Benoit Assou-Ekotto, his positioning was all over the place, and obviously I can't pin our poor performance first half down to one player, but hey it's my blog so there......... let's just say it was the same worrying performance we have been subjected to of late.   Roll on the January transfer window when we can hopefully get another striker on board......

The picture to the left is a lesson in social media life.  Yes he was hauled back to Spurs and told to delete the tweet, but that does not mean it will necessarily disappear hmmmmf, moving on....................

Second half, and to quote a cliche, it really became a "game of two halves".  We brought on AJ from the off, and you could see the difference immediately.  Finally, when it came to crossing into the box, we had strikers in there. I'm not blaming Charlie, he is not a goal poacher who hangs around the box, he's a team player who tracks back, and that's why it is difficult with just him up front.

A much better game to watch, we had momentum and the team came together.   On 55 Minutes, MOTM Matty Phillips got our equaliser, and we pushed on from there.   Although we always looked like getting another, I was resigning myself to another draw, when on 92 Minutes our Charlie leapt like a salmon to head in the winning goal.   YESSSSSSSSSSSSS

Relief, hope restored, happy times, all of the above.   Back to 3rd in the table, but more importantly with a performance more fitting to our earlier Championship winning form.

We've the FA Cup game tomorrow away to Everton and I, like a lot of other supporters, just hope that Harry takes the view that our Championship is more important and he rests the main players.   We'll wait and see, but for me, roll on the Championship, and hoping by my birthday (18th January - home to Huddersfield), we will be still pushing onwards and upwards.

Thanks for reading!
Annie x
Posted by JustAnnieQPR at 12:47