Yes, St Albans, you weren't seeing things, on the 4th February, you did witness Mayor Annie, in a onesie, on a scooter, surrounded by Zippy and George (of Rainbow fame for my younger listeners) and Buzz Lightyear, also on a scooter, alongside other bizarrely dressed honkers, racing through town with THE baton!

I was so proud to be part of this effort, the buzz (pardon the pun Helen) on the day was amazing, and most importantly the 2 schools Mandeville and St Peters, with their human chain and running tracks, had THE most fun ever for a school day!

As I write this update the baton has reached Birmingham already, on it's way to John O'Groats, and with another month to go, TeamHonk are already at 95% of their £20,000 target!!!!! WOW!!!!! I have no doubt they are going to smash that any day soon!

Anyhoo, go TeamHonk, here's a few pics from our day!   Thanks for reading, and don't forget you can support our local effort here!

The first ever Sainsbury’s Sport Relief Games take place from Friday 21st to Sunday 23rd March 2014. The public can join the fun and games by running, swimming or cycling their way to raising cash at over a thousand venues around the country, including the landmark events at Queen Elizabeth Olympic Park.
As one of the biggest fundraising events, Sport Relief brings the entire nation together to get active raise cash and change lives. The money raised by the public is spent by Comic Relief to help transform the lives of some of the poorest and most disadvantaged people both at home in the UK and across the world.
And here's our little bit........................Three lovely friends and fellow bloggers went to Ghana 2 years ago, with Davina McCall and Jonathon Ross et all, as you do.  Tanya Barrow Penny Alexander and Annie Spratt made up TeamHonk They did a fantastic job raising awareness and also raised over £10K to boot.  Pretty impressive stuff. 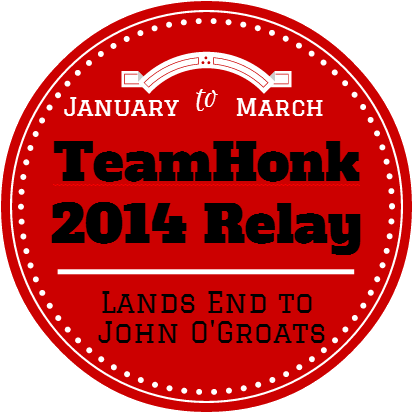 Well this year TeamHonk HQ came up with the idea of getting a baton from Lands End to John O Groats, purely by blogger power, in aid of Sport Relief......hoping to raise awareness of this fine organisation and ultimately to raise even more money this year!