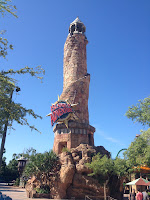 The Monday of the second week we finally got around to going to Universal Islands of Adventure.   The Harry Potter ride was on my radar, but apart from that had no real expectations.  Boy oh boy what a treat!   This turned out to be one of THE best ever days on this trip.   And this was agreed by all of us.   We also chose to go back on the Thursday, the day before we left for home, so we really got the best out of it. 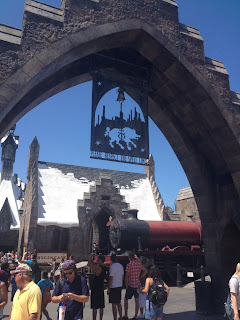 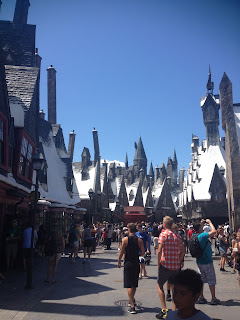 The park itself is very manageable, and only has 7 “lands”.  We headed straight to the Wizarding World of Harry Potter, and the Harry Potter and the Forbidden Journey ride.  The Floridian kids were back to school this last week of August and queues were no longer than 20mins.  Having said that, they do have a child swap room, to make life easier, so 1 parent stays with the young one/s, and then walks straight on the ride when the first parent comes off.  They were in fact playing the 1st  Harry Potter film in the Child Swap room, with gory bits deleted in case of very young ones.  Scarlett was a little star the whole trip, and patiently sat out rides whilst the three of us took our turns.   They also have a single rider queue by the way, as most of them do, and they don’t seem to mind if groups go together, as long as they understand that they will be split up when they get to the front.

I absolutely adored this ride.  I actually squealed when it felt I was flying high above the Quidditch pitch!!!!  However, Chris wasn’t a fan, and neither was Jasper.  We’ve worked out now that Jasper doesn’t like anything in the dark, and Chris is a purest Coaster boy… doesn’t like jerky.   For me it was the visuals that did it, and if you relax and go with it am sure you’ll love it too.  Actually, I can’t swear that you will love it, but having ridden it around 7 times over 2 days, I loved it so much.  (Do let me know)!

The whole Harry Potter area in itself was something to behold.   The Hogwarts Express was there of course, as well as the conductor, the train station next door, and rising spectacularly up in front of you, amidst the blue sky and fluffy clouds, is Hogwarts itself.  All the little shops mentioned in the books and films are there too, and you can buy Butter Beer of course!   What’s not to love?  It really was magical.   Within the area are some other rides too, a tamer coaster for younger ones called Flight of the Hippogriff, and another double coaster called Dragon Challenge.   You have to ride both of them as they are both separate in themselves. 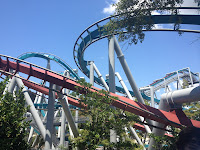 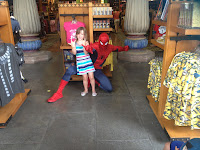 There was something for everybody here, and I was particularly pleased that Jasper got his big-ride-mojo back and rode Hulk in Marvel Super Hero Island.  He went on with Chris first and then dragged me on.  Thinking it was just another coaster it has some wicked surprises, I loved it too, best coaster ever (though Seaworld’s Manta up there too hmmmm).  The Amazing Adventure of Spider-Man was a great ride/simulator for all of us too.   Scarlett was a bit wary, but loved it.

For Scarlett herself (5yo), there was Seuss landing, perfectly designed for her age group (though I confess to loving the Cat in the Hat ride too).  Although our children weren’t really brought up with Dr Seuss, the area is really fun, like you are actually walking through a children’s book, with fun rides, a high up train around the area and also a carousel. 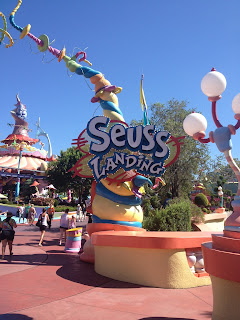 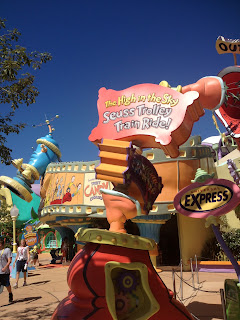 If water rides are your thing then head to Toon Lagoon.  Jurassic Park has a cute, soar through the air over the park *thing*, but it’s an 80 second ride and probably didn’t warrant the 20 min wait.

Just a fantastic park, if we were booking to go back (here’s hoping in a few years) visiting this park would make us all very excited.  If you are in the area it is a must see, for at least 1 day!

Annie x
Posted by JustAnnieQPR at 13:36