Germany - family holiday on the Mosel :) 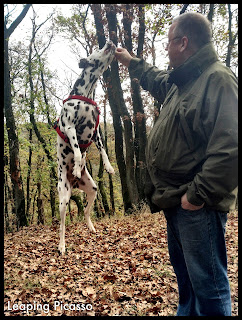 Imagine the scene, myself and Chris asking Jasper (8) and Scarlett (4) where they would like to go back to for half term? Euro Disney or Germany - a resounding "Germany"!  I was amazed for a second, but of course apart from the fantastic scenery and freedom they had, there was the fantastic place we stayed - Zurich Alten Weinkelter - and a certain Dalmatian dog named Picasso!

We were here last September, but drove via 2 nights in Belgium. Apart from Ghent, which was lovely, we found Belgian to be very expensive, and the place we stayed in was a major disappointment!

So this time we retuned via Ryanair.  I was a little concerned about getting around, but I needn't have worried - the transport system around Germany is fantastic and very easy to navigate!

Booking a train is more akin to visiting a travel agent, they are very precise and plan your journey meticulously. 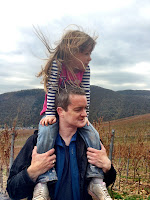 As well as some big day trips out, we also enjoyed some long walks in the surrounding hills and up amongst the vineyards.   I think the pictures speak for themselves!

The picture on the left is after a 3 hour walk!   Scarlett deserved a shoulder ride after the climbing she had done!   Certainly blew the cobwebs out and the scenery was breathtaking if a little scary at times!


Of course Jasper just skipped along with Picasso, I'd say a 4yo Picasso and an 8yo Jasper are clearly a good match :)


Our first big trip out was to Cologne.  Armed with sandwiches and pain aux choc - after the daily visit to the local bakery - we boarded the 8.36 bus to Cochem, from where we caught the trains.    Cologne - or Koln as they call it, was fantastic.  As soon as you leave the station you are greeted by the most amazing Cathedral!    It had a real climb up to the belfry but it was worth it as the views were magnificent!

A short walk down the river and we boarded a cable car for a ride across the Rhine - which also went over a naturists bathing facility?????   I'm afraid to say that we were giggling like children, erm as were the children!  You can see the video on YouTube here!

There was also a zoo, but unfortunately we didn't have time to do it justice, will bear it in mind for next time!