I reckon there may be some sore heads amongst our hoopers this morning, and for good reason!

Saturday 5th October 2013, at home to Barnsley, and a club record breaking moment on the cards for @Robert1Green 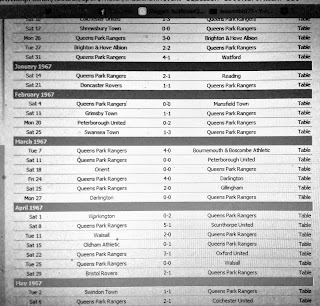 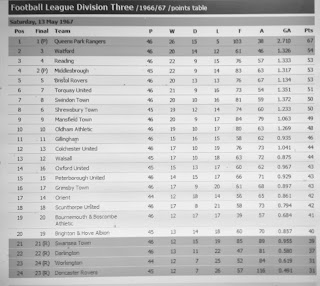 Back in 1967 (the year of my birth), the late Peter Springett was the last QPR goalkeeper, before Rob, to keep 7 clean sheets in a row.

The pressure was on Rob today, to make it a record-breaking 8, but you wouldn't have known it as he was his usual calm between the sticks.

During the second half, particularly at 2-0 up (more about that in a bit), a lot of us fans were chanting "Greeno" but smiling he simply gestured for us all to calm down haha!


Before I go back to the match itself, take a little looksee at how the table ended that year, makes interesting reading indeed.

Our very own @RodneyMarsh10 played that season too, and he was at the game to watch, and was very excited about Rob getting the record.  Just brilliant.


The game itself was fairly boring in the first half, we didn't look too troubled, though there was nearly a scrambled Barnsley goal, and we went in 0-0 at half-time.  The second half was much livelier, and a 66th min strike by Charlie Austin saw us off the mark.   He also performed his trademark #slidingmoves for our @elmodedude - you need to watch the fans forum (minute 22) featuring our Emily for this to make sense, even @OfficialQPR tweeted about it during the game.   Loving the #QPRTwitFam before, during and after!  By the way 'Arry this is our Emily, Queen of the Park Rangers Blog :)

The second goal was a penalty on 87 minutes, again calmly taken by "our" Charlie Austin.   What a fantastic day.   We are now second to Burnley (Charlie's previous club of course) on Goal Difference, with a game in hand.

Next game we are away to Millwall, never an easy fixture, but come on you Super Hoopersssssssssssssssss.

This was also the 60th anniversary of Floodlights being installed at Loftus Road by the way.  We played Arsenal that day back in 1953, let's hope we get to play them again some time soon (shhhhhhhhhhhh don't jinx it)!

Annie x
Posted by JustAnnieQPR at 19:18