We are a family who are daft about pets and animals in general.  However, I must admit to being shocked when my husband decided he wanted to have chickens.  However, not just any old chickens, ex-battery chickens, “the scrawnier the better”.  I was worried but, as with any project my husband embarks on, I must say he researched it thoroughly, and was in constant contact with the British Hen Welfare Trust www.BHWT.org.uk

It was explained to us that once the chickens get to around 18 months old, the farmers are ready to let them go.  The BHWT then swoop and collect them all, and advise those on the ever-growing (thank Goodness) waiting list where to collect from.   Those that weren’t fit would be nursed until there were fit to do so.  We also found out that the chickens wouldn’t know night from day, and their legs may not be strong enough to go up and down runs, or sit on perches, but that they would improve and gain in strength with time!!!

You have to adopt the chickens in 3’s, we decided to get 6, and bought a coop which could house 10, as we wanted to make sure they had plenty of room.   We didn’t intend to let ours out of the coop - unfortunately our garden is not big enough, and they can be quite destructive, which wouldn’t be good with my job!

So we were on the list for some months when we finally got the call, but as bad luck would have it, it was a day when Arsenal were playing an early game and QPR were also at home.  We would never have got to the site in Essex at 3pm.   We were disappointed but we then found out that 6 of the chickens were quite poorly and once/if they got better we could have those.   Of course that fitted in beautifully with Chris’s wishes.

Finally we were able to go get them.   I was shocked at how awful they looked, featherless wings and red bottoms, and this was them better!  But they were bright and lively and the kids fell in love instantly.   We were told that 2 of them were way down on the pecking order and to keep a watch. 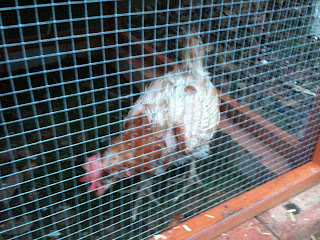 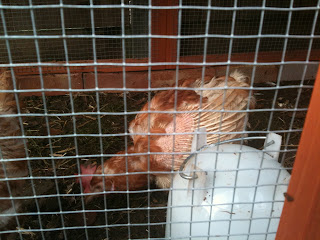 When we got them home I videoed them going into the coop!

We have named them Bernard, Adel, Dora, Beaky, MC (motherclucker), and Baggy Bum (after our late cat Bageera)!

Adel and Dora were the 2 way down in the pecking order, but they are all getting along just fine now.  They take themselves off to bed as soon as its dark, and give a little *goodnight* when we close their door.

This experience has made me re-visit my whole ideas on eggs too, and I now check ingredients to ensure if they contain eggs, it actually states free range, cos if it doesn’t then it won’t be!

They are an absolute joy, and have all feathered up beautifully.  We are getting between 4 and 6 eggs a day, and the children love going to collect them.  This is my lovely feathered Adel chicken now, named after Adel Taarabt of course :) 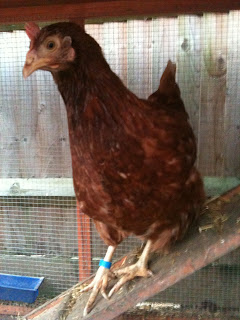 If you were also considering adopting ex-battery chickens feel free to contact me, but I would certainly urge you to go for it!  The chickens cost us around £35, the feed is cheap but the reward is bountiful!  Happy chickens, happy children, beautiful eggs :)

Annie x
Posted by JustAnnieQPR at 17:29