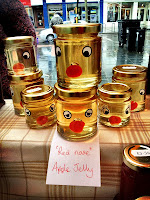 Having been frugal of late, and trying to eat from stocks we have, I couldn't help but indulge from the St Albans Farmers Market.

We started by visiting my friend Vickie from @HumbersHomemade who was selling Red Nose Day apple jelly, which we all fell in love with (interpretation Kids argued over which jar and who was carrying it etc. - luckily Vickie's a dab hand as a mother of 4 and diffused the situation beautifully)!

After that we were in search of a pork joint to slow cooker - I had been having withdrawal symptoms.  I chose a Pork Shoulder as that is a bit fattier and lends itself better to slowcooking, don't let that put you off tho, as it serves to baste throughout the cooking, but you can cut it off - if you are so inclined :) 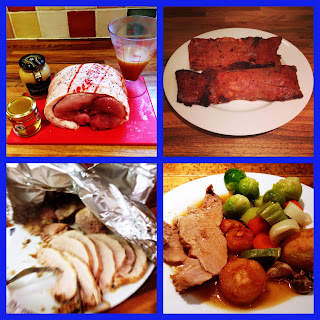 So I decided to keep it simple.  I cut the fat off from the joint, but placed it back on for cooking - figured this would make it easier to remove to make crackling later.

I put it in the slow cooker, then mixed 125ml chicken stock, 2 tbs of apple jelly, 1 table of mustard and poured it over the joint.  Covered and cooked on high for 2 hours, then low for another 3 or 4.

I made the gravy from the juice by draining and then thickening with cornflour, and accompanied with farmers market steamed vegetables.  I grilled the fat under the grill, having covered with salt, and literally sat watching it cos I've overdone the crackling too many times!

Will definitely be doing this again :)