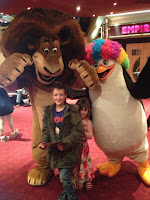 Yesterday we very chuffed to be invited to a special preview of Madagascar 3 in 3D (due for general release 19th November).  We were there as guests of "Royal Caribbean Cruises" who wanted us to experience a little of the magic they can provide for all the family on board their ships.

They have a partnership with Dreamworks, so not only are they able to show the films on board, they are also able to let the kids meet with characters from the film!   From fun parades, that everyone can take part in, meet and greet mealtimes, fun activities such as story time, dance parties and more! 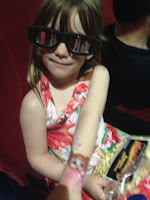 So in line with this, our children were able to meet the characters from Madagascar, have their faces (or arms) painted with their favourite characters, and were entertained by a juggler!   They really did make them feel special :)

The film itself was brilliant!  The last 3D film I saw was the Rocky Horror Show in America - circa 1982, and Chris had never seen one!  It was our kids first time too, and I was concerned that Scarlett (5 in November) would be a little scared, but no they both loved it.  I particularly loved that at the beginning, when the titles of the film appeared to be right in front of your nose, all around the cinema you saw little hands reaching out to try and touch them! 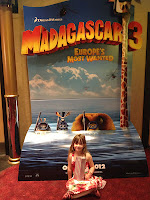 This time Alex, Melman, Marty and Gloria find themselves as "most Wanted in Europe" with the usual supporting (or unsupporting) penguins and monkeys!   There is a great character called Madame Dubois, who is particularly evil and odd looking, but she wears bright red lipstick and Jasper decided that I looked like her.  Charming!

The friends are still on a quest to get back to their Zoo in New York City, and end up joining a circus!  I won't spoil it for you, but it was a brilliant journey and there are some fab gags for the adults to enjoy too!  We've had to promise we'll get our own copy when it gets released, though may not stretch to a 3D TV just yet! 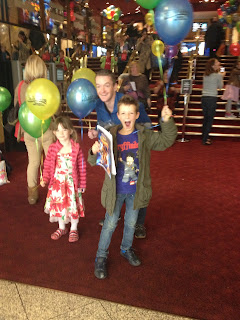 We left armed with balloons (yes I actually let my kids have them for once) and we had a stroll around Chinatown before heading back to my mums for lunch.

What a fab day, thank you Royal Caribbean :)